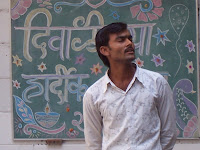 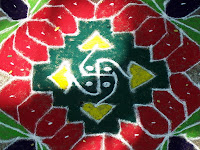 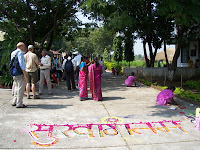 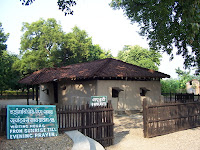 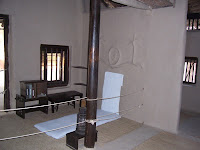 Yesterday we had a Get Together in Bamhani, before the staff goes on diwali holidays. Short show acts were prepared by the kindergarten children, sewing class girls and technical class boys. My favourite was the spontaneous performance of this young man. Nice moves;) Besides the show there was a Rangoli drawing competition (who draw the nicest chalk powder ornament design) and journey to Jerusalem game. After that we (Arvo, Jona - CEO from Germany - and two guests from Goettingen) went to Gandhis Ahsram in Sevagram, appr. 2 hrs. south Nagpur, in the middle of nowhere. Here he lived and worked from 1936. It was an interesting place as you could go into the hut he lived in (Bapu Kuti), his office (his telephone still there), kitchen, his wifes hut (Ba Kuti) etc. People who want to built their lives on basis of the eleven vows of the ashram can work and live in the area as Sadhaks. I spotted some, wearing the simple white handmade clothes.